LOVE, BOMBS & APPLES – THE NEW PLAY BY AWARD WINNING PLAYWRIGHT HASSAN ABDULRAZZAK WILL BE TOURING MAY – JULY 2016. A ONE MAN SHOW PERFORMED BY ASIF KHAN. IT’S THE COMIC TALE OF FOUR MEN, FROM DIFFERENT PARTS OF THE GLOBE, EXPERIENCING A MOMENT OF REVELATION.

“what is most extraordinary in this presentation of the ordinary is the performance of the only actor Asif Khan who jumps between scenes and characters with such ease and deftness. A truly exceptional performance.” – London Theatre

Love, Bombs & Apples by hassan abdulrazzak:  A Palestinian actor learns there is more to English girls than pure sex appeal. A Pakistani-born terror suspect figures out what is wrong with his first novel. A British youth suspects all is not what it seems with his object of desire. A New Yorker asks his girlfriend for a sexual favour at the worst possible time.

Hassan Abdulrazzak is of Iraqi origin, born in Prague and living in London. His first play Baghdad Wedding, was staged at Soho Theatre in 2007 to great acclaim. It went on to have productions in Australia and India and was also broadcast on BBC radio 3.

His comic monologue play Love, Bombs and Apples was selected from 114 scripts to be part of the PlayWROUGHT3 festival and was premiered at the Arcola Theatre in July 2015 as part of the Shubbak festival. 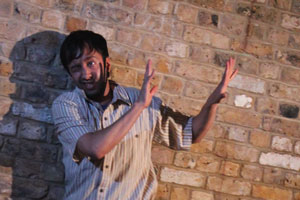 LOVE IN THE TIME OF BARRIERS

Emad is a Palestinian actor playing Hamlet at AlKasba theatre. On the opening night, he meets a beautiful English girl. But he can’t take her to his parents house to have sex and none of his mates are wiling to lend him their apartments. So he ends up taking her to the security barrier, thinking it would be quiet as no one goes there at night. And that’s when the couple come under the search lights of Israeli soldiers. 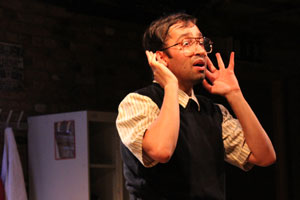 Sajid is a Pakistani born aspiring writer. He pens what he thinks will be the definitive post 9/11 novel which he sends to all the publishers and critics in Britain. But when the police arrive at his home with their sniffer dogs he begins to realise that not everyone is convinced his novel is a work of fiction. 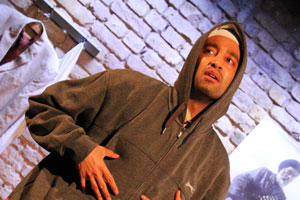 A Bradford youth is in love with the Mac store at Westfield. His object of desire is the iPhone yet he suspects that Westfield was built to pacify Asian youth like himself, stopping him and others from going over to Syria for jihad. But doesn’t the iPhone have a lot in common with ISIS? 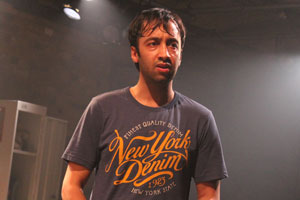 Isaac is in love with Sarah but things are going sour between them. She is a pro-Palestinian activist and his father fights tooth and nail for Israel. Tonight, Isaac must decide which side he is on.

PERFORMED BY ASIF KHAN: Asif trained at The Royal Academy Of Dramatic Art (RADA), where he won a Laurence Olivier Bursary Award.